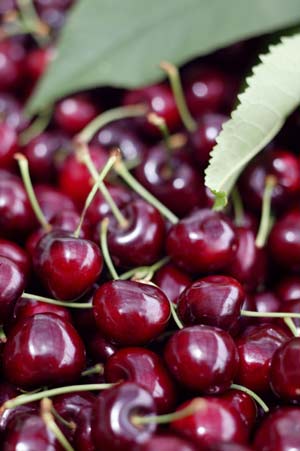 Oh joy! Its cherry season! For a few shining weeks each summer, fresh luscious cherries are available in every grocery store, farm stand and fruit outlet. And even at Costco. Chomp on them after they've spent a night in the fridge and their cool, juicy, al dente goodness is one of summer's highlights.

Their color, ironically, isn't cherry red. Its actually a lovely blackened maroon which isn't really replicated elsewhere in nature. Yes, some plums come close (nice try) but they just won't ever be cherries now will they.

I can't make the connection between these gems and the fire engine red maraschinos of Shirley Temple fame. Surely they're not of the same genus or phylum. And let's not even talk about the canned stuff called cherry pie filling. That's not even food.

Here's a great recipe I've made for the past few summers. Don't let the title throw you off - its really good. It turns out better if you cook the cherries on the stovetop first and pre-bake the piecrust , both for about 10 minutes or so.
http://pie.allrecipes.com/az/HlthyndDlicisChrryPi.asp
Posted by Colleen at 6/22/2006 05:53:00 PM